SHS is an independent day school for boys from JK to Grade 8. Our mission is to inspire and empower each boy through his formative years. 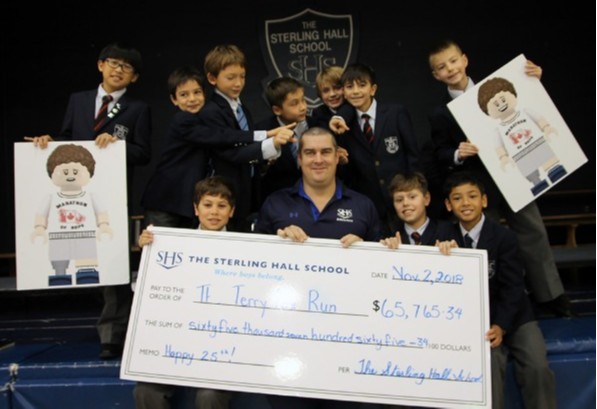 The power and purpose behind our school's relationship with The Terry Fox Foundation was evident in today's Citizenship Assembly with the emotional reaction of TFF's Wendy Fric. When our Grade 8 Citizenship Team (Agents of Change) announced that the Sterling Community had raised $62,805.34 from pledges and $7,500 from Mini-Terry sales, for a total of $71,595.34, Wendy paused a moment, saying, "It was an overwhelming day." She went on to tell the boys how impressed she was with their many creative efforts to raise pledges, and their commitment and dedication in doing so. Wendy reinforced, "That is what Terry would have done to reach his goals."

She presented SHS with a gift—a special edition of Douglas Coupland's Terry to add to our collection in the Phelan Learning Commons. After his visit to the school to launch our campaign in September, Terry's brother, Fred Fox, took the time to write a beautiful message to SHS students, staff and parents. Noah, Nathaniel and Brandon's Found Poetry presentation was a beautiful reminder of why Terry Fox was unique, and an inspiration.

We thank every family who donated to The Terry Fox Foundation and to our boys for all their efforts. Two Grade 4s, Henry and Louis, were the winners for the most dollars raised and pledges collected, respectively. Henry's class had the great thrill of shaving Mr. Meakin's head as a prize for this achievement. Names were announced from each class for the student who collected the most in donations. These boys will receive Mini-Terrys. Our Mini-Terry mastermind creators, brothers Will and Harrison, presented Mini-Terry #25 to Wendy to take back to The Terry Fox Foundation. Mini-Terrys will also be delivered at SickKids and Camp Oochigeas to children with cancer.